Happy Travel Tuesday my loves! I ended up with a SERIOUS case of Wanderlust last night, and spent a solid hour looking at all these fantastic vacations that I wish I could take. But, the only traveling I’m doing for the foreseeable future is to weddings and back, I’m just going to have to settle for pictures. If you’re heading somewhere beautiful, leave a comment below so I can follow your adventures and live vicariously through you!

Today I’m already talking about our last full day in Jackson! I’m so so so sad that writing about this trip is almost over. I’ve been missing the mountains a lot lately, and reliving this trip has been so much fun for me! Okay. It’s time for me to stop rambling. Let’s head back to Jackson!
For our last day in Jackson Hole we decided to do something adventurous. I mean, if you can’t be your most adventurous self in the mountains, that why even go? So, we booked a white water rafting trip. I’m going to be the first to tell you that I was TERRIFIED of this. I was so dang worried I was going to fly out of the raft, because every time I’ve ever gone tubing I get flipped out.
We did a lot of research before choosing who to take our rafting trip with. There are a bunch of places in the area, but we ended up deciding on Sands Whitewater. We were SO thrilled with this decision in the end. And I highly recommend doing this on your last day in Jackson. If you ask me, a trip down the Snake River is the perfect way to end a perfect vacation.
You start your journey at their office just off Hwy 89. (It’s just outside downtown Jackson.) They’ll check you in and put you on a bus. Then, they’ll drive you to your drop off point. Our bus driver was the cutest old man who told us Snapple Facts about Jackson Hole the entire drive.
When you get there, you’ll see a few guides and your rafts waiting for you. They each have a list of the names of the people on their raft. We lucked out and got the greatest guide EVER. His name was Stewart and if you’re ever taking a rafting trip, you should totally request him. (If he still even works there.) Before we even got into the raft, Stewart gave us a safety speech (which included what to do if you fell out) and decided on who was paddling. If you’re on a 14 person raft, and a smaller person, chances are you aren’t going to have to paddle. (THANK GOD. I wanted to be as far away from that edge as possible!)
Once the speech is over, you’ll climb in and start your trip. It starts off scenic and beautiful. Stewart spent this time getting to know us, telling jokes, and letting us in on a little running bet he and the other guides had going. Whichever raft had someone fall out, that raft guide had to buy the beers that night. Lucky for Stewart, we were the only raft that everyone stayed securely in. (Poor Scooter was having a hard time with his group! I’m pretty sure he bought the beers that night.)
Then you start to realized you’re going a little bit faster. Then your senses perk up. Then, you hear the rapids. Then you see them. And then you start to scream.
I honestly kept my eyes closed for a HUGE chunk of the time when we hit the first set of rapids because I was straight terrified. As soon we started approaching, these bad boys were over our heads, and we were pretty much straight up and down going over them.
When we made it through with no one falling out, I knew we were in the clear. And I was able to relax…a little bit 🙂 It was the greatest experience, and we had the best time.
Moving on the the details…
The Trip: You raft down an 8 mile stretch of the Snake River.
The Time: About 3 1/2 Hours.
What to Wear:
What to Expect:
What to Bring:
While you’re rafting, they will take pictures of you. I don’t care how much they cost, you need to buy them. All of them. Because you will die laughing over and over again when you look back. (Thank you Sands, for all these fantastic photos!) They give you a code when you get back to the office, and then you can go check them out later in downtown Jackson. You can purchase them there (we bought only one printed photo because we knew chances were, it’d get ruined traveling back) and then we ordered online when we got home. We wanted to wait and order online when we got home so we could download them on to our computers. This way, we’d be able to keep them all forever. They’ll give you the website and login info so you can order up to a few months later. They will also ship your orders home for you if you’d rather! 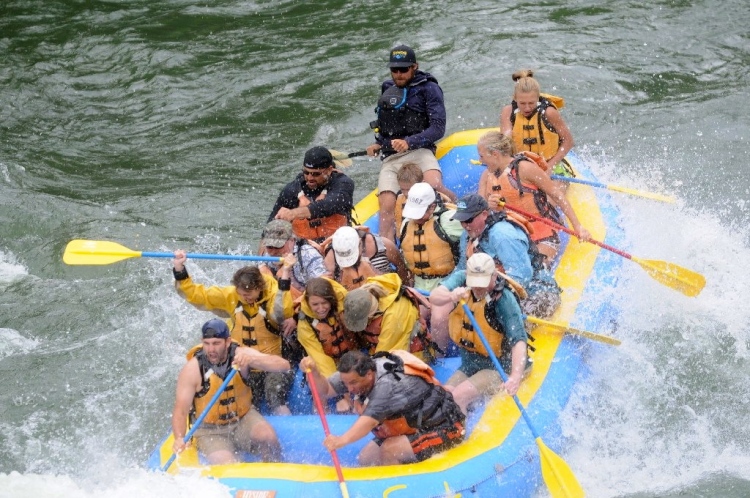 After rafting, we headed back to our cabin to finish packing and to get dressed for the evening. We were spending out last night in Downtown Jackson.
We started with a few drinks at The Million Dollar Cowboy Bar. I don’t care how cheesy you think this place is, you gotta stop in if you’re in Jackson. The place is like stepping into an old western movie. You can read more about it here. 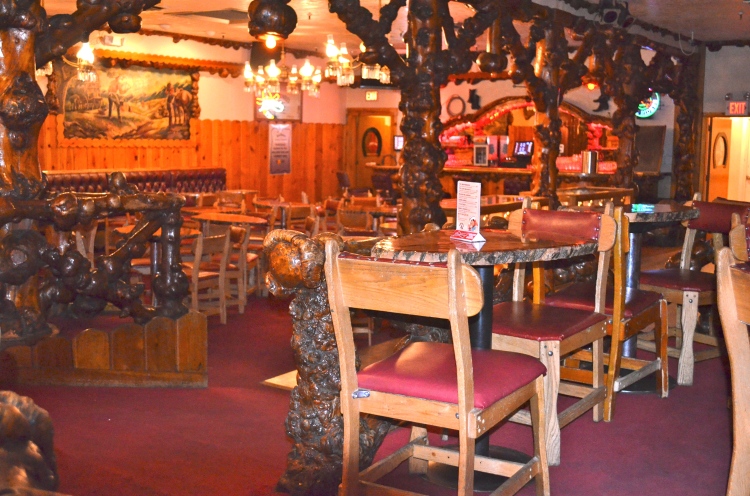 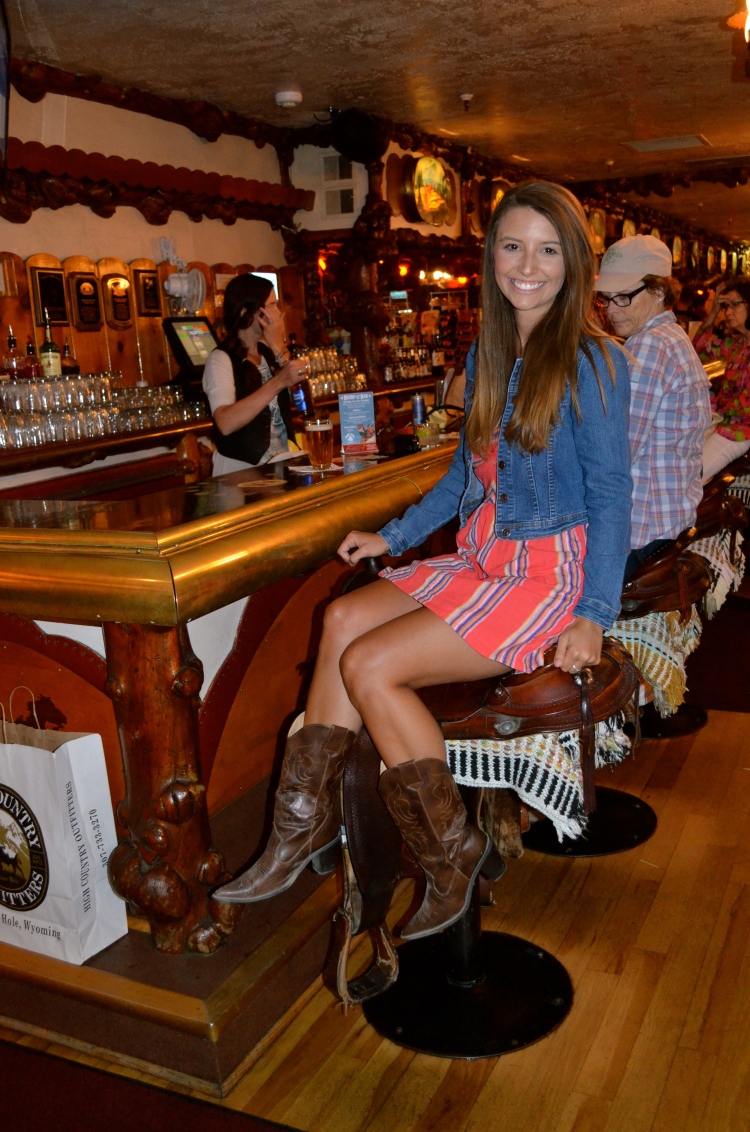 Then we headed outside to see the Town Square Shootout. Every summer evening (except Sundays) at 6 pm, the Jackson Hole Shootout Gang performs and it is quite the sight. They know how to entertain a crowd, and people were LOVING it. It was a little bit corny for my tastes, however, I still laughed along and enjoyed it! 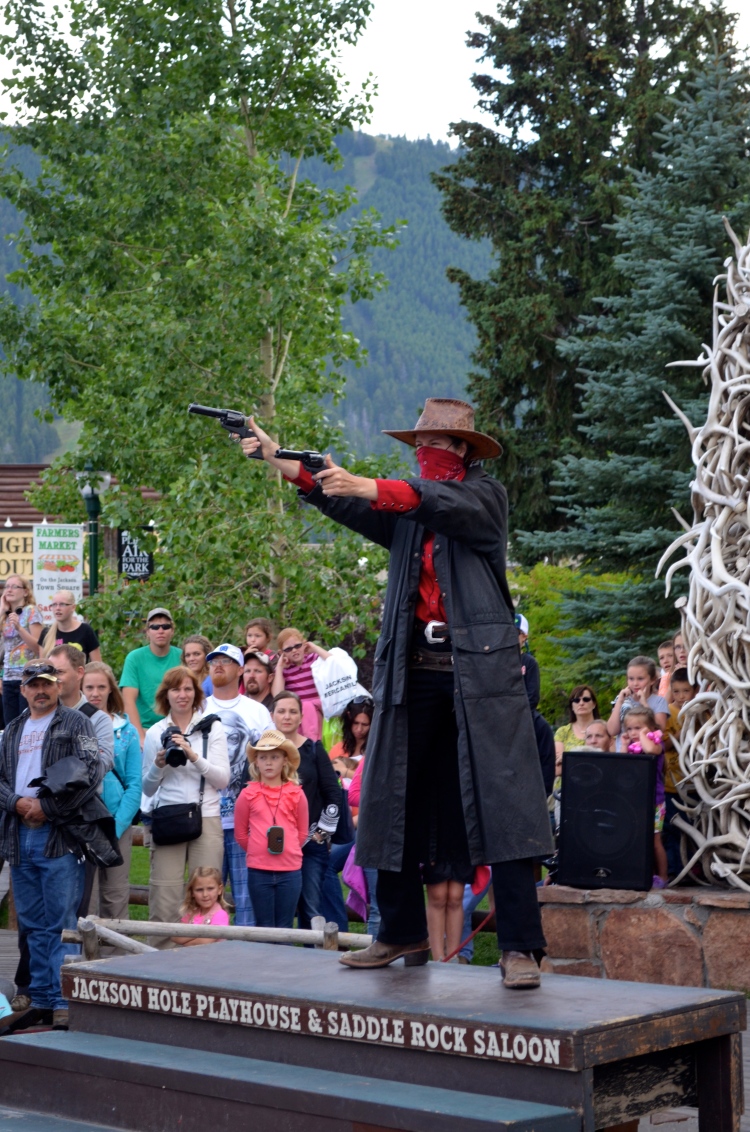 After the shootout we finished up our shopping and headed to dinner at Snake River Brewing. Do yourself a favor and eat there. You’ll thank me later. Read more about Snake River Brewing in a previous post, here.
I was convinced our last day in Jackson was so cloudy and rainy because Wyoming wasn’t ready for us to leave. As we were driving back to our cabin for the last time, a rainbow popped up, the sun was setting over the mountains, and then I was certain, Wyoming wanted us to stay. 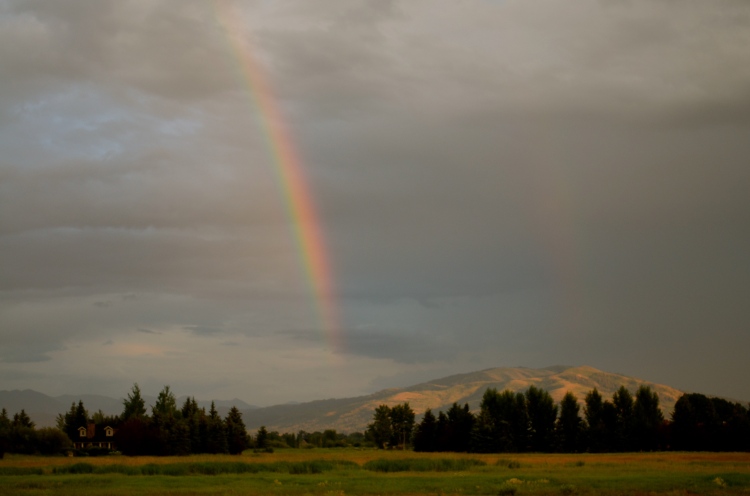 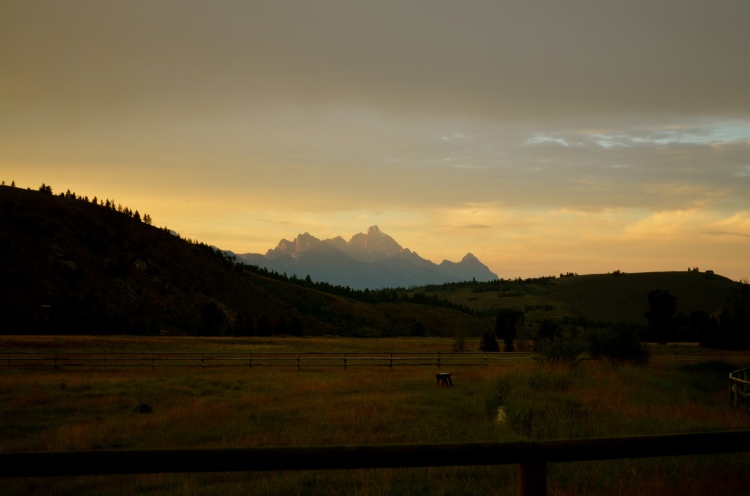 Next week, I’m going to be sharing my final thoughts on Jackson.
Until then!
Xx.
Savannah