It is officially almost Thanksgiving (I can practically SMELL my Grandpa’s stuffing already) and we’re 24 days away from GILMORE GIRLS. In case you’re wondering, I’ll be dressed like this every day until November 25th…

I feel like I’ve been waiting for this month for FOREVER and I’m so so so so happy it’s finally here!
Not only is it November 1st, but it’s also Travel Tuesday!! YAY! Today I’m talking all about the beautiful missions in San Antonio. I just want to mention that even if you aren’t a religious person, you’ll still love these. The history that fills the walls is astounding, and their beauty is quite breathtaking. If you are religious, you can see a mass at each of the missions too! I would highly recommend this. I was so sad that the day I had my car there weren’t any masses happening. If you want to plan your trip to be able to see one, you’ll need to make sure you head to the missions on a Saturday or Sunday. For more information on the mass schedules click here!

Speaking of my car… you need one to see all the missions. DO NOT listen to all those people on Trip Advisor that say you can bike from the beginning of The Missions Trail to the end. If you’re staying downtown, and planning to leave from there, you’re looking at about an 18 mile trip to Mission Espada (the furthest from the city) ONE WAY. If you’re looking to start at Mission Concepcion, it’s only 7ish miles to Mission Espada, but you’ve still got to get yourselves there somehow.

I’m not saying the bike trip is bad. In fact, I’m sure it would be very beautiful, especially on a nice Texas day. The bike trail is paved, and there are plenty of BCycle stations near it to make bike pick up and drop offs easy peasy. However, the place is freakin hilly, and if you’re not an experienced bike rider, you might have a seriously hard time. When I was first doing my research, my plan was to ride a bike. But, I let my Dad talk me into renting a car for the day, and I am SO DAMN GLAD. I would have probably died trying to make that trip from downtown, to Mission Espada and back! There are so many places to rent cars right near The Riverwalk, there is plenty of parking at each mission, and the drives between are really easy.
PLUS if you have a car you can drive to In-N-Out burger for lunch before you go. And if you ask me, that’s like the best reason to rent a car I’ve ever heard, especially if you live nowhere near an In-N-Out like me and you’re just straight up craving a Double Double, Animal Style with Fries. (UGH I’m drooling just thinking about it. Michigan needs an In-N-Out STAT.)

Okay. Time to get to the missions! 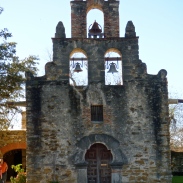 Deep in the heart of Texas, you’ll find not just all my exes, but the San Antonio Missions National Historic Park and UNSECO World Heritage Site. What are the missions exactly? They tell the story of the Spanish people trying to control their area. They were meant to bring Christianity and safety to the indigenous people. This park is laid out a bit differently than other National Parks you may have visited. There are four main points of interest, all within two-three miles of each other. There are four missions, Mission Concepcion, Mission San Jose, Mission San Juan Capistrano, and Mission Espada. The Alamo is also considered one of these missions, but it is not part of the missions park.
Planning your Visit: The easiest way to see the missions is to start at the top, and work your way down, or vice versa. I am going to HIGHLY recommend starting at the bottom and working your way up. I found Mission Concepcion and Mission San Jose to be my favorite of the four. Personally, I thought Mission San Juan was underwhelming, and Mission Espada was pretty, but I didn’t like it as much as the first two. So I was kind of bummed that I rushed through the first two to be sure I got to the last two, when ultimately, I’d have rather spent all my time at Mission San Jose. Please remember, this is my personal opinion, others might really love Mission San Juan and Mission Espada. Also, you don’t have to try to see The Alamo the same day as the rest of the missions. Since it is right downtown, you will have easy access to it at any point in time. That being said, I’ll talk more about The Alamo in a separate post.
(Just a quick note, while I was there, most of the churches were still decorated for Christmas, which is why you’re seeing the holiday decor in some of the pictures!)
Mission Conception: Mission Conception was the very first mission I saw, and it was absolutely stunning. There are original frescos in a bunch of the rooms, and I couldn’t quite believe it when i saw them. They were literally painted in 1775!!! I loved that there were so many rooms to explore at this mission, I loved the grandness of it, and I loved the church inside. But what I loved more than anything else about this mission is that it seemed to be unchanged by time.
Mission San Jose: Mission San Jose was BY FAR my favorite of all the missions. It is called the “Queen of the Missions” for a reason. It is the largest, the prettiest and was almost fully restored in the 1930s. Walking in is like stepping back in time. The grounds are quite big, and there is a lot to explore. It is at this mission that you realize that they weren’t just made to be churches. They were communities where people lived, worshiped, and worked together. Because it is such a gem, this is where you’ll find the park’s visitors center, a museum and gift shop. I happened to be there on an abnormally warm day in January. It was sunny and 80 degrees with bright blue skies. I sat on the lawn and listened to the bells for almost an hour. They were so beautiful. I really wished I would have stayed there for longer. It was honestly perfect.

This mission was the biggest let down for me. I’m not sure if it was because I had just come from Mission San Jose, or if it was because I couldn’t go inside. I just wasn’t as impressed by this one. Of course, it was beautiful in it’s own right, but I only found myself exploring here for about 20 minutes. Do I think you should still see it? Of course. But I would highly recommend seeing it BEFORE you see Mission San Jose and Mission Conception. Also, don’t let these pictures fool you. These are my three best pictures, at the best angles, in the best lighting.

Mission Espada: Mission Espada was the very first mission in Texas. It is quaint, and charming. I liked this mission, don’t get me wrong. I loved the little church! However, it felt much more modern to me. There were church offices and a more modern building attached to it, and because the wall that originally surrounded the mission was no longer standing, you could see the modern houses all around it.
Time: Okay. I always want to know, about how much time do I need to set aside to see everything I want to see? Honestly, you can spend as much, or as little time as you want when exploring The Missions Park. I will say, if you are crazy and going to bike, you’ll need most of the day. I personally saw the missions in one afternoon. The day I went was the day that Trev’s conference began, and he didn’t have to be there until 1. So we saw The Alamo together in the morning, then drove over to In-N-Out for lunch. I dropped him off at his conference center, and then headed out to the missions. I was there until right around 5, then went and picked him up and we used the car to go get BBQ before we had to return it. I was there about 4 hours and felt like I had plenty of time to see all the missions. However, I would say, divide your time up knowing it will take a bit of time to get from one to the next, and try to decide which missions you’d like to spend the most time at.
Cost: The Missions Park is absolutely, 100% free.
The missions were honestly my favorite thing about San Antonio. They were peaceful, and beautiful, and full of history. If you’re anywhere close to them, I truly believe they are a must see!
I hope you’re all  having a happy Tuesday! We’re spending our time packing up our apartment to move to the building behind us. (Yup. Totally rolling my eyes.) Because we are moving next Tuesday and Wednesday, you won’t see a Travel Tuesday post from me. SO two weeks from today, you can expect a city guide to San Antonio!
Tomorrow I’m back with another wedding post. And this one includes one of my favorite past times…. online shopping. You won’t want to miss it!
Until Tomorrow!
Xx.
Savannah

Feelin 2022.✨ It’s going to be a good year. I can feel it.
Merry Christmas, Happy Holidays🎄(I hope sang that in NSYNC’s voices.)
Get out your Christmas jammies… Christmas is only two sleeps away! 🎄❤️🎅🏼🎁✨
Have a very merry Christmas… breakfast 🎄 Looking to make your Christmas morning a little bit sweeter? Come make my dad’s famous Christmas Morning French Toast bake featuring @hudsonville_ic ‘s Bananas Foster ice cream baked inside… and plopped on top! Head to the link in my bio (or my stories) for the easiest Christmas breakfast recipe ever! #ad #hudsonvilleicecream #christmasmorning #holidayrecipes
Thankful for @tklump1 and pie. Grateful for all of you 💕 Happy Thanksgiving everyone!
Move over @tomholland2013 … there’s a new Spider Man in town 🕸 Swipe to see me show off my Spidey skills. 😂 (Also. Wearing this to work today. I’m sure I’ll be one of 30 little Spideys running around 👻) #halloween #spiderman
But did you actually expect me to make it through October without posting a pumpkin picture? 🎃 That’s okay. Me neither. 🤷🏽‍♀️
The happiest days are spent Up North. #puremichigan #saturdayvibes
Fall weekends + @tecumsehbrewingco got me like 🍂🎃🍻🧡 #fall #weekendvibes