Hi Friends! Today I’m back with a super fun post. As most of you know, I spent my summer rocking this super cute, super stylish uniform.

That’s right! I worked for the Detroit Tigers and it seriously was so much better than I expected it to be. The job wasn’t glamours… at all. I worked in guest services. I basically pushed wheel chairs, opened doors and said “The Bathroom is at 138” a billion and a half times. As un-glamours as the job was, I met some really awesome people, and had a ton of fun!

Oh… and I got to work with this guy 🙂 We had this routine down that I freakin loved. I’d take him to work super early and then I’d pack dinner and we’d eat it at his work and go to the games, then head home late at night. As weird as it sounds, I seriously miss all our extra time together. 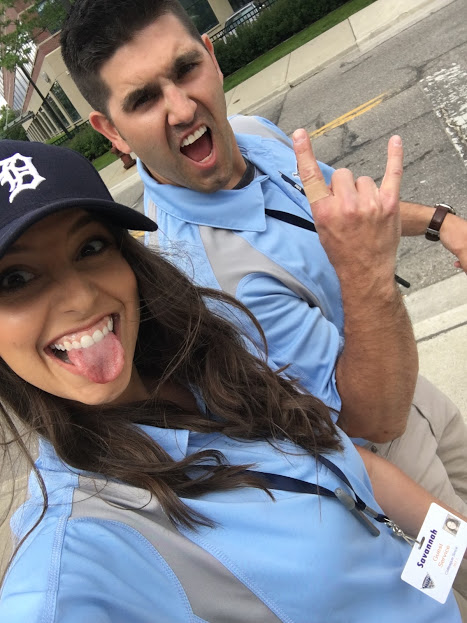 There’s a bit of magic that comes with attending a baseball game. The other fans, the smells of hot dogs, the icy cold beers and the famous players are more than enough to keep fans coming back game after game. It’s easy to let the atmosphere of the ballpark mask what’s really happening. There are literally thousands of people behind the scenes, working their butts off to make your experience the best it can possibly be.

Dudes dressed up as mascots, cooks serving up delicious treats to suite holders, ushers helping people find their seats, house keeping making sure everything is clean, supervisors sprinting from one end of the park to another and of course guest service representatives. The list could go on and on. All of these people are the reason you have so much fun while you’re at the ball park. And all of these people deserve a smile and a thank you next summer while you’re there. Because I can promise you, they are some of the best people you will ever meet… and they would really appreciate knowing that you appreciate all they do!

So while I was pushing wheel chairs, opening doors, granting suite access and filling out First Game Certificates, I kept notes in my head of all the things I learned while working at a ball park. And if you’ve ever worked at one, I guarantee you can TOTALLY relate.

10 Things I Learned Working For The Detroit Tigers

I’m seriously going to miss working for the Tigers during the off season, and only hope that I can work there next summer too! But lucky for me, I still have a few games left to enjoy before officially saying “See Ya Later” to Comerica Park. In fact, that’s where you’re going to find me this weekend! So if you’re at the game, be sure to come say hello!

Have a wonderful weekend my friends! It’s going to feel like summer here, so I hope it’s just as beautiful where you are too!! I’ll be back on Sunday 🙂

5 thoughts on “10 Things I learned Working for The Tigers”

Saturdays in Ann Arbor >>>>> (PS… check out that championship ring 😍)
Mentally, I’m here. 🥾 🏔 ✨ #montana #lastbestplace #glaciernationalpark
Pausing this moment forever. We’ll miss you, Montana.
Out West with the best ✨
Montana was straight up showing off today.
Hey Glacier, we like you even in the rain. ⛈
Core Memory.
Peak Experience. 🏔
Montana is unreal.